In the late 1870’s Professors Elihu Thomson and Edwin Houston began experimenting with and patenting improvements on existing arc lamp and dynamo designs. In 1880 after being approached by a group of businessmen from New Britain CT, Thomson & Houston agreed to the formation of a company that would engage in the commercial manufacture of lighting systems (both arc and incandescent) based on their own patents. This was the American Electric Company which existed until 1883 when it was reorganized and renamed the Thomson-Houston Electric Company. The Thomson-Houston Company was successful and grew to compete with the older Brush and Edison companies. In 1889 in an attempt to avoid patent disputes over a double-carbon arc lamp design, Thomson-Houston negotiated the purchase of a controlling interest in the Brush company. The Swan Incandescent Light Company was part of the Brush plant so it was included in the takeover. Swan manufactured an incandescent system that had been developed at about the same time as Edison’s. In 1892 Thomson-Houston merged with the Edison companies to form the giant General Electric Company 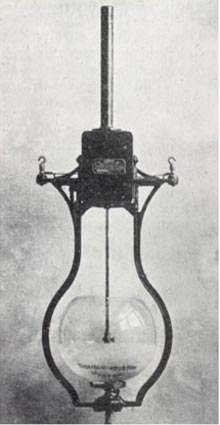 The pair of lamps below were found in the attic of a building in Cape May NJ that had been a hotel in the late 1800’s. One of our Adams-Bagnall lamps also came out of an old hotel attic. These two lamps could easily have been tossed in a dumpster and lost forever, but luckily they were recognized as something special and saved. The tags on the lamps indicate that they were manufactured by American Electric under Thomson-Houston patents dated 1880. Since American Electric changed names in 1883, these lamps can be dated to the period between 1880 and 1883. They originally would have had glass globes near the base that partially enclosed the arc. These globes would have provided some slight weather protection but would also have kept any errant sparks from falling on passers by below. They are DC lamps and would have been powered by their own dedicated dynamo. In the early 1880s gas and oil lamps were still the norm, and electric lights could draw crowds of curious onlookers. A couple of lamps like these were state of the art technology, and probably made the local newspapers when they were installed. 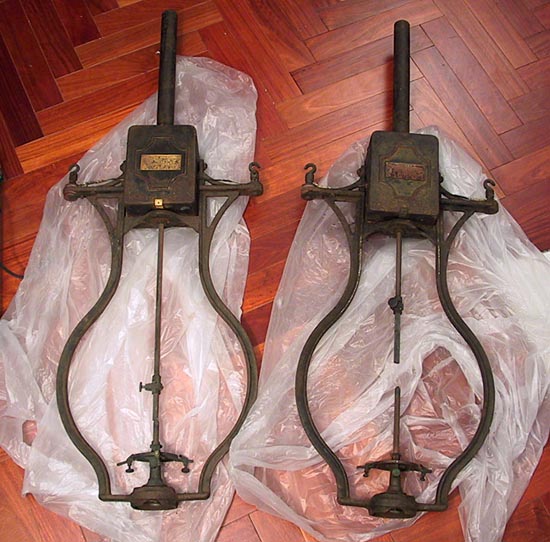 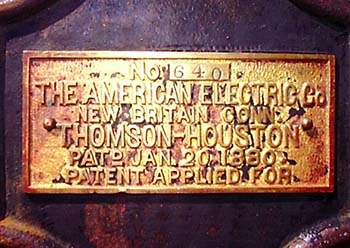 These lamps are each about four feet tall, solid iron, and each weighs a considerable amount. The tube extending out the top Lamps like these could produce between 2,000 and 4,000 candle power. In 1880 Wabash Indiana had used just four Brush lamps of similar design to light the entire town and earn itself the title of first city anywhere to be wholly electrically lit. Remember that this was a time when gas and kerosene lighting were common. Incandescent lamps were just starting to show up in a few cities for indoor lighting, but could only produce about 16 candle power Carbon arc was a proven and established technology, and remained the brightest artificial light source until fairly recently. 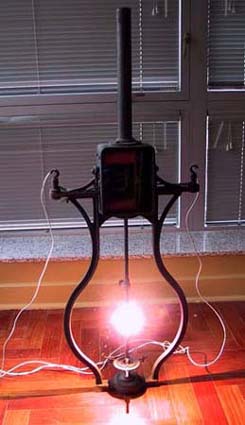 The photo above shows the first lighting of this arc lamp in probably well over 100 years. The last time this lamp operated was in a world of gas lamps and horse drawn carriages. At the time most people had never seen an electric light before. Just imagine what it would have been like to see a 3,000 candle power arc lamp when all you knew were relatively dim gas and kerosene lamps. In this shot the camera’s lens flare exaggerated the arc. Here the lamp is being powered by a very simple current limited DC power supply, and the cover is off the lamp mechanism.

This lamp is wired for series operation and uses a differential design with two opposing sets of electromagnets. Note the rocker mechanism on the far right. It looks sort of like a see-saw. When power is applied to the lamp, the lower pair of electromagnets pull this rocker towards themselves. The rocker is attached to a clutch which grabs the upper carbon an pulls it upwards away from the lower carbon. On the lower left between the two bottom electromagnets you can see a squat metal tube. This is the dashpot, and its role is to dampen the pull on the upper carbon so that it does not suddenly jerk away from the lower carbon. 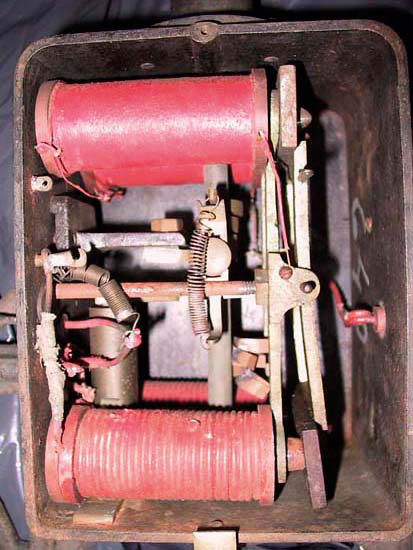 This photo shows one of the lamp’s internal mechanism as it was found. It would actually not be operational as you see it here because it had been intentionally shorted out. That spring you see on the left has been removed from it’s original position attached to the rocker, and instead has been soldered across the two power leads feeding the mechanism. Perhaps at some point the circuit that these lamps ran on was upgraded to a newer incandescent system, and for some reason these lamps were left hooked up, but bridged so that they would not longer operate. At any rate, after the spring was de-soldered and put back where it belonged, this lamp ran beautifully.