Yes, there were electric lights powered by central stations before Edison’s! Carbon arc lamps saw extensive use throughout the USA and the world from the late 1870s on. Due to their intense light they were not that practical for lighting small interior spaces. However even after the advent of the incandescent bulb, arc lamps survived for decades being used as streetlights and for lighting large interior spaces like factories, mills, and department stores. Early incandescent lamps produced about 16 candle power, while arc lamps produced 2,000-4,000 candle power. Incandescent lamps just didn’t have the output or efficiency of arcs. Today carbon arcs are still used in some large spotlights and projectors, though they have supplanted by xenon arc which is a related technology.

Arc lamps come from almost the exact historical point when electricity went from being a scientific curiosity to  part of everyday life. This was a time of horse-drawn carriages and gaslights, when the Civil War was just over ten years in the past. For many people an arc lamp was the first electrical device they had ever seen. In the late 1870s a lone arc lamp in a store window (powered by its own little dynamo) could draw large crowds. This was the first and most visible manifestation of a wave of technological development that would rapidly and forever change the world. With electric light came the centralized power distribution that would not only power cities and towns, but would provide the motive force to allow industry to thrive. By the turn of the century electric lights were more commonplace, and companies like General Electric were making tens of thousands of arc lamps a year. Despite this, they are surprisingly hard to find and we are always on the lookout for them.  If you come across one for sale please drop us a line! 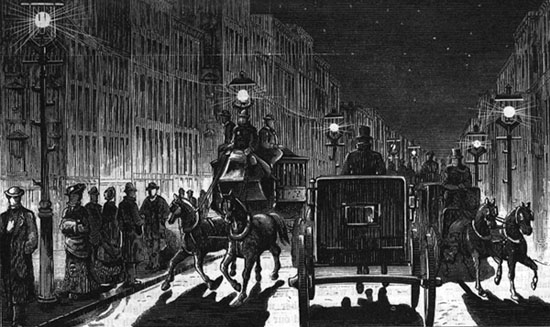 A self adjusting mechanical lamp using a superheated plasma to produce light is a pretty interesting idea. Now think of these lamps being in widespread use when incandescent lightbulbs were still experimental. Just imagine seeing one for the first time when you knew nothing of electricity, and the brightest artificial light you had ever seen before was a flickering gas or oil lamp.

Below you will find many pages of information, movies, and historical documents related to arc lighting