Few natural phenomenon inspire the wonder and awe that thunder and lightning do. Since mankind’s earliest days lightning has been regarded as something supernatural, and it is only relatively recently that a greater understanding has evolved of the mechanisms that cause lightning. Lightning is the most visible manifestation of the continuous action of the global electrical circuit. It is also responsible for more deaths each year in the United States than any other severe weather phenomenon. On these pages you will find more information about lightning and the fascinating study of atmospheric electricity.

Lightning is an extremely high voltage, high current, transient electrical discharge. It is most commonly caused by charge separation in cumulonimbus clouds, or “thunderheads”. These types of clouds typically are very dynamic with strong ascending and descending air currents. They are formed in unstable atmospheric zones where there is typically a lot of heat and moisture. They have a distinctive anvil shape, and the tops of these clouds can often reach 25,000-40,000 feet. The mechanism of charge separation within a cumulonimbus cloud is not fully understood, but it is commonly believed that circulating water droplets and ice particles move charge from the base of the cloud to the upper areas causing a huge difference in potential between the top of the cloud and the bottom. This can be as much as 100,000,000 volts. A difference in potential is also created between the cloud and the ground beneath it. The earth is normally negatively charged, however below a negatively thunderhead electrostatic induction creates a region of positive charge. The earth itself acts like one plate in a huge capacitor, and the the cloud the other.

At some point the potential difference becomes great enough to cause ionization and an avalanche breakdown in the cloud as electrons jump from air molecule to air molecule forming a negatively charged stepped leader. This initial spark moves earthward in increments from about ten to fifty yards. As the leader descends it is really not being attracted to any single object on the ground, but rather the overall attraction of the opposite charge at ground level. The voltage potential at the tip of the leader can be in excess of 10 million volts. Once it is within a step or two of the ground, the electrostatic field between itself and the ground becomes severely stressed. As the stepped leader approaches, any object on the ground that distorts the electric field (buildings, people, trees, rocks, etc.), or even the ground itself, may emit an upwardly moving positively charged streamer. If this streamer connects with the stepped leader, a return stroke will be initiated as charge moves back up the ionized channel from the ground to the cloud. This return stroke is what we see as lightning, and its peak current can be over a hundred thousand amperes. Since this return stroke may not completely discharge the cloud, several repeat dart leaders and return strokes may follow the initial sequence creating a visual flickering effect.

The return stroke carries an immense amount of current (tens of thousands of amperes), which heats the air around the channel to approximately 10,000 degrees in a fraction of a second. This creates an acoustic shock wave that radiates outward from the entire length of the stroke. 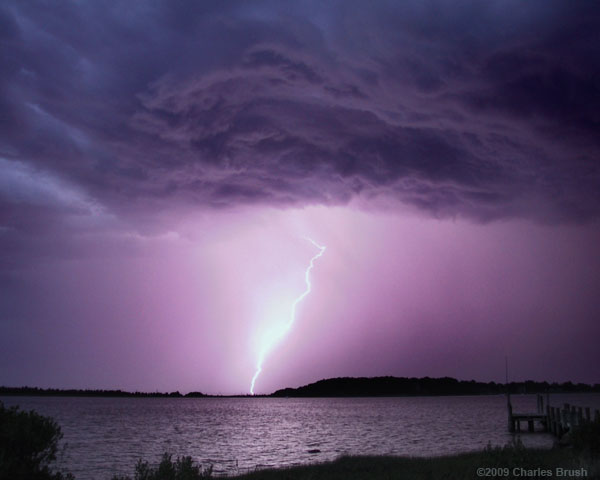 Electric charge all around us.

It is not only during thunderstorms that the atmosphere is electrically active. In fact an electric field surrounds us all the time, even in fair weather. There is a 200,000 – 500,000 Volt gradient between the surface of the earth and the ionosphere all the time. This translates to about 100 volts for every 3.2 feet . There is also a continuous current of approximately 1,000 amperes flowing from the atmosphere to the ground during fair weather. Scientists believe is that this current is caused by the combined effect of all the thunderstorms around the world moving negative charge to the ground and positive charge to the atmosphere…essentially working like giant batteries.

Why don’t we feel anything? Well all that current is distributed across the entire surface of the planet, so locally it is around 2×10-12 amperes/meter2 (that’s about .000000000002 amperes for every 3.2 square feet). That combined with the fact that air is a poor conductor keeps us safe…that is unless there is a thunderstorm! In a thunderstorm local voltage and current values go much higher, into the tens of thousands of volts, sometimes even causing glowing corona to be emitted by sharp objects above the ground. This is also known as St. Elmo’s fire and it is an indication that the local field is so high that there is imminent risk of a lightning strike. 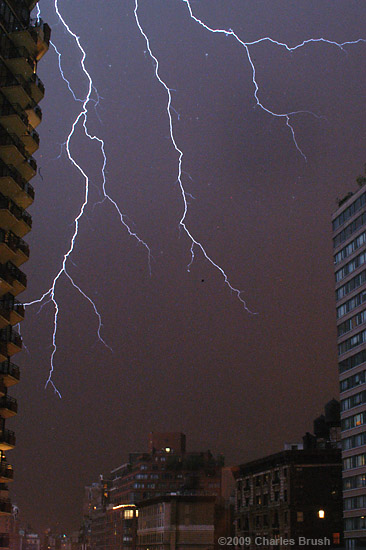 You’ve probably heard how dangerous it can be to stand under a tree during a lighting storm, but did you know that even indoors you shouldn’t be in contact with appliances or plumbing?  Your home’s copper plumbing and electrical wires make great conductors if lighting were to strike your house so stya clear of them.  There are a lot of other safety tips on the National Weather Service’s excellent ligtning safety web site, many of which you are probably unaware of. 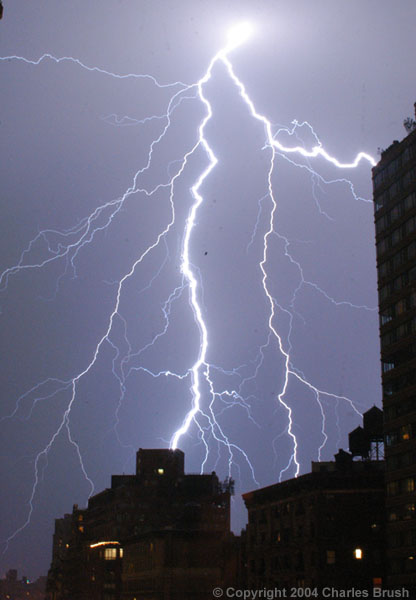