Nikola Tesla invented the the Tesla Coil near the end of the 19th century. A Tesla Coil is a pulsed air-core resonant transformer capable of creating enormous voltages and huge discharges. It achieves its high voltages through resonant rise as opposed to merely primary/secondary turns ratio as in conventional transformers. Tesla eventually evolved his design into a three coil “magnifying transmitter” which he hoped to use to transmit power and information throughout the world without wires. In addition to the Tesla Coil, Nikola Tesla was responsible for numerous inventions, some of the more notable being radio, the AC induction motor, and the multiple phase power distribution system we use today.

How does a Tesla coil work?   In the illustration to the left you can see a primary circuit consisting of a capacitor and inductor. First the capacitor is charged to a high voltage…typically over 10,000 volts by means of a high voltage transformer. Eventually the voltage reaches the breakdown voltage of the spark gap, at which point the sparkgap begins conducting. The spark gap acts like a switch and once it starts conducting, it connects the capacitor in parallel with the primary inductor. The capacitor then discharges into the inductor.  This creates a magnetic field around the primary inductor, and for a brief instant most of the energy in the circuit is stored in the magnetic field around the inductor. The field then collapses causing the inductor to discharge back into the capacitor and the process repeats.

The photo below graphically illustrates the pulsed nature of a typical Tesla coil using a sparkgap. The “bands” that you can see in the sparks are separate discharges caught by the camera exposure. This coil uses a 10″ diameter secondary as well as an asynchronous rotary spark gap. 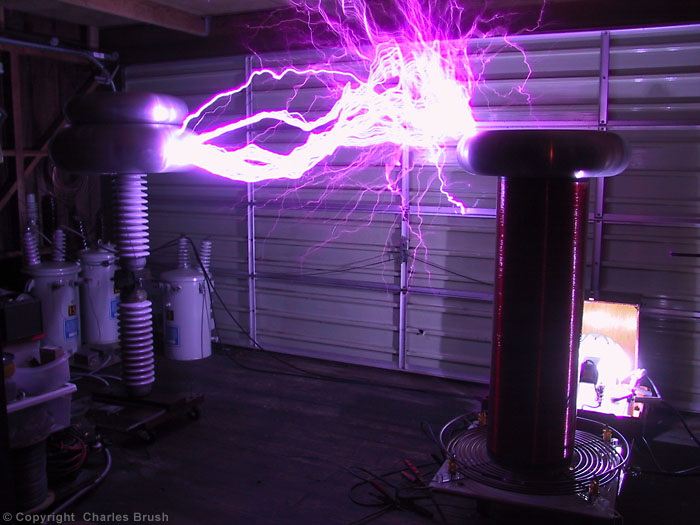 In these photo you can see the 19.9kV supply transformer to the left along with the rotary spark gap behind the Tesla coil secondary.  At higher power levels a simple static spark gap would not be able to “switch off” cleanly and allow the tank circuit to resonate efficiently.   The rotary spark gap incorporates twelve tungsten electrodes on a G10 disk balanced to >5,000 RPM.  Two pairs of stationary electrodes creates a circuit that effectively has four gaps in series, thus allowing it to switch much higher power levels. 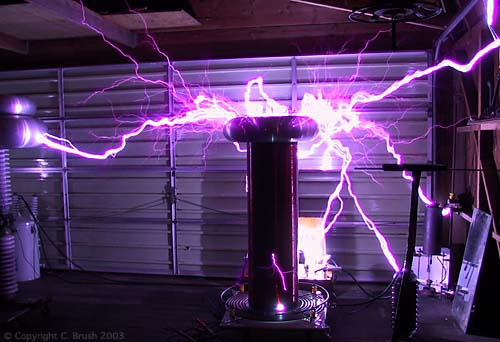 Note the racing sparks at the base of the coil and arcing at the bottom.  These can quickly destroy a secondary coil and often indicated that  the secondary is overcoupled to the primary and needs to be raised.  The photo below shows the rotary sparkgap and high voltage pulse capacitors 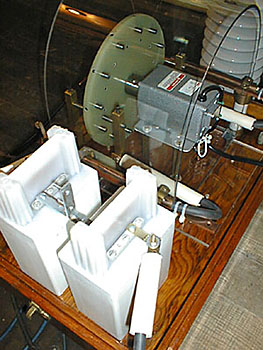