The Adams-Bagnall Company was formed in the mid 1890’s by employees of the Brush/Swan incandescent plant who left Brush after the company was taken over by Thomson-Houston. If you look at photographs of city streets in the early 1900’s you will more than likely see an Adams-Bagnall lamp like those below. An interesting thing about these lamps is that they use the same “ring” clutch design that was used in the very first Brush arc lamps of the 1870’s, but in a more modern “enclosed” arc design. What is an “enclosed” arc lamp? The arc is enclosed by a small oblong inner globe which is almost airtight. After a few minutes of operation the oxygen inside this globe is consumed, thus greatly extending the life of the carbons. These types of lamps could burn for up to about 80 hours on a single set of carbons, whereas earlier “open” designs needed their carbons changed every few hours. Walking along a city street in the early 1900’s you never would have guessed that the ornate lamps overhead housed machinery designed to regulate and maintain a superheated plasma arc. Remarkably, this technology was in large scale use by the late 1870’s long before the lightbulb was a commercial reality .

Above right: Adams-Bagnall enclosed arc lamp with shade
This photo shows a configuration with a glass shade that was most likely used indoors in a large space, or possibly outdoors under an awning or canopy. The glass shade is extremely fragile, and it is remarkable that it has survived the last 100 years intact. This particular lamp was found in the attic of a building in Ohio that had been a hotel in the 1890’s. It is one of a pair, the second of which resides in the Rough & Tumble museum in Kinzers PA 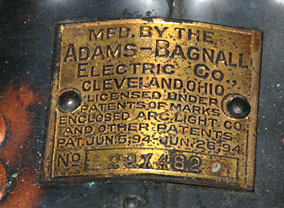 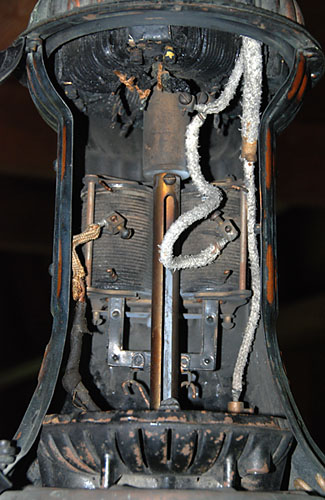 Internal mechanism
The technology inside this ornate metal case is remarkable in its ingenuity and simplicity. At the top of the lamp you can see a current limiting choke. This is essentially an inductor with a series of taps that allow the current draw of the lamp to be adjusted for differing line voltages. Without this inductor, the lamp would pull an enormous amount of current, particularly when first turned on.    Further down you can see the two big electromagnets which are attached to the upper carbon via a “ring clutch” mechanism. The clutch is not visible here, but it consists of a small disc with a round hole in it that is just larger than the diameter of one of the carbons. When the ring is raised by one edge, its angle grabs and pulls the carbon, but if the ring is released, it will drop down and let go of the carbon. This clutch is the same design that was used in Brush lamps starting in the 1870’s and it shows this lamp’s lineage.    The upper carbon is visible inside the tube in the middle of the lamp. When power is applied the electromagnets grab the upper carbon and pull it way from the lower carbon thus establishing an arc. A dashpot dampens and smooths this movement so that it is not a sudden jerk. As the carbons burn down, the mechanism feeds the upper carbon so that the tips of the two carbons stay at a constant distance. If power is cut off, the carbons come together and the lamp is ready to be turned on again.

Click on any image or movie for a full sized version