The General Electric Company was formed in 1892. It was the result of a meger between the Edison General electric Company and the Thomson-Houston Company, which themselves incorporated several other companies. The late 1880’s had been a period of fragmentation and widespread patent disputes that were threatening the industry as a whole. Just imagine numerous different standards all over the country, encompassing generation, distribution, equipment, etc., and you start to get the idea. Thomson-Houston held a number of critical patents and owned several other large companies including the Brush Electric Company and the Swan Incandescent Light Company which had been bought by Brush years earlier. By 1892 Thomson-Houston had become a domnant force in competition with the Edison companies. A merger simply made sense, and the formation of General Electric helped avoid a stalemate and accelerate development of the electric industry in America.   It took a while for the numerous companies that made up GE to merge in a practical sense, and for several years GE sold systems under the Edison, Thomson-Houston, and Brush names since each was well established throughout the country. This page takes a look at some early GE arc lamps which I have found and restored. I am always interested in finding more lamps or dynamos so if you come across any please feel free to drop me a line! I also love to hear from other collectors and lighting enthusiasts.

When I found this lamp it was almost completely intact, except for the exterior globe which I had to add. It is an AC powered lamp and works right off of 115v wall current. Inside the lamp near the top is a large current limiting choke. Unfortunately this lamp does not have a tag identifying it, however I believe it is a General Electric G.I. Type K19 lamp. It matches the illustration in 1911 GE

Note the two globes. This design is used to increase the life of the carbons. The interior globe is almost airtight so that after a few minutes the arc burns mostly in an atmosphere of carbon monoxide, carbon dioxide, and nitrogen. This type of lamp is called an “enclosed” lamp for this reason, and several other companies made enclosed lamps as well. Early arc lamps were not enclosed, and could only burn a few hours. Double carbon lamps extended this so that lamps could burn through the night. Partially enclosed lamps extended the burn time further. Fully enclosing the arc made these lamps much more practical since they required a lot less maintenance.

This is a General Electric “Intensified” arc lamp dating from about 1912 or so.  It is designed for interior use, and lamps like this could be found in large spaces like department stores and large building lobbies.

Below are photos of the interior of the GE intensified DC lamp pre and post restoration. You can see that it has an amazingly complex mechanism. When off, counterweights bring the upper and lower carbons together. When power is applied, a solenoid mechanism wired in series pulls them apart to establish the arc. While operating, the solenoids combined with a clutch assembly regulate the carbons as they burn down. 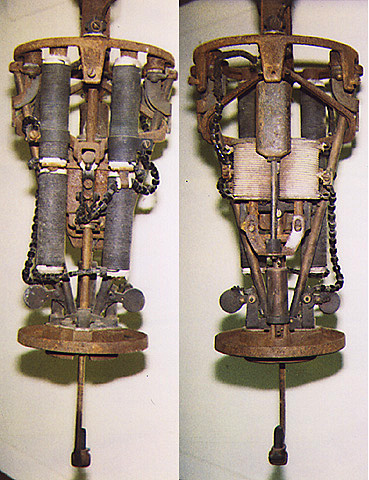 Since this lamp runs on direct current, its operation is almost silent.  All you hear is the mechanism moving occasionally, and the hiss of the arc.  Note the four large power resistors wound on porcelain tubes in the left side of the image above.  These serve to limit current to the arc and solenoids so that the lamp does not appear as a near short circuit and pull too much current when operating.  Lamps designed to work on alternating current typically have current limiting inductors inside which serve the same purpose.